Your journey begins with your arrival in Ortona. It was in the days surrounding Christmas Day 1943 in the rubble of Ortona, in what one reporter called the “Courtyard of Hell,” where Canadians fought their most famous battle during the Italian campaign. Ortona, the “Italian Stalingrad,” was the site of some of the fiercest fighting in WW2. We will “Honour the Fallen” at our first ceremonial stop, the Moro River Canadian War Cemetery. Among the stops in Ortona is Casa Berardi, where on 14 December 1943, “C” Company of the Royal 22nd Regiment, commanded by Captain Paul Triquet, and seven tanks from the Ontario Tank Regiment occupied Casa Berardi. The Germans immediately staged a determined counterattack to retake the village. For his actions, Captain Paul Triquet was awarded the first Victoria Cross bestowed on a Canadian in the Italian Campaign for the dogged defence of Casa Berardi.

Travelling north along the breathtaking coastline beginning in Ortona we will hug the gorgeous Adriatic Coastline. We will stop at the breathtaking and unique Ancona Cemetery. Along the way, stops will take us to places like Piazza de Pololo, Cessena where a plaque commemorating “Smokey” Smith’s actions that would see him awarded the Victoria Cross for actions near the Savio River on the night of 21/22 October 1944. “Smokey” until his death in 2005 was Canada’s last surviving VC recipient.
Rimini, the Northern Allied objective in 1943 and the famed Gothic line. Canadian service in Italy would end in this area in February 1945. In many ways, Italy is where victory in Europe began. Those brave souls of the Allied armies who fought with such courage were far from the infamous and unwise label of being “D-Day Dodgers.” In Italy, Canada more than pulled her weight on the road to liberation and ultimate victory!

The ride ends in historic Ravenna, where Julius Caesar gathered with his 13th Legion forces before crossing the Rubicon. On January 10th, 49BC, he stepped into the river and declared: “Jacta Alea Est.”; “Let the die be cast.” An act that ended the Roman Republic and launched the Roman Empire, which forever changed the course of western history and culture.

In the Ravenna area, we will visit both the Ravenna War Cemetery and the Villanova Canadian War Cemetery, where panels of a Bailey Bridge so key to the campaign and the monument to the Battle of the Two Rivers sit. 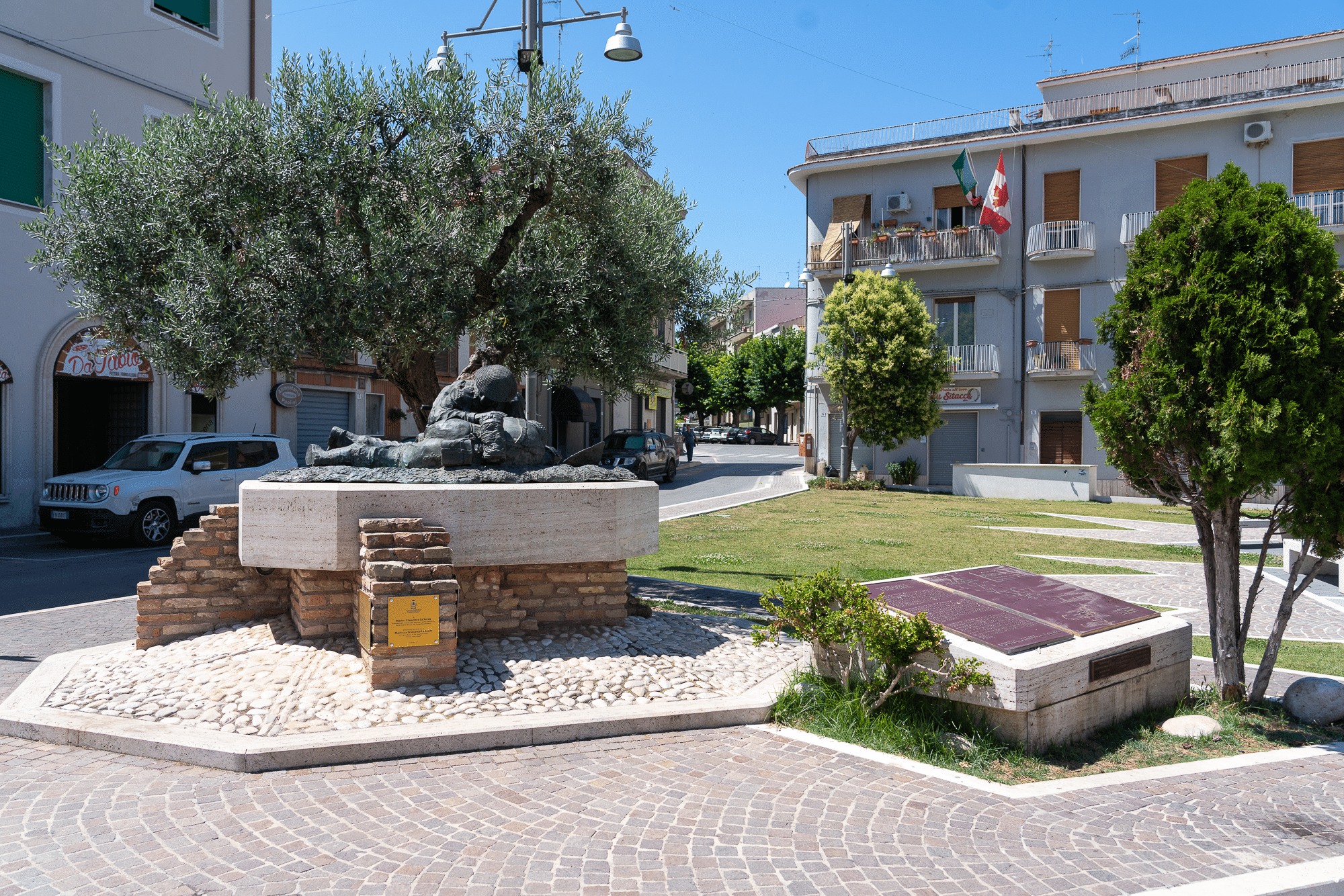 The Price of Peace monument is located in the Piazza Plebiscito in Ortona, Italy. This powerful memorial was commissioned by a group of Canadian Veterans who had held a special reunion in 1998 in the town where they had fought during the Second World War. Designed by Canadian artist Rob Surette, it was unveiled in 1999 to commemorate the sacrifices and achievements of our soldiers during the Battle of Ortona. 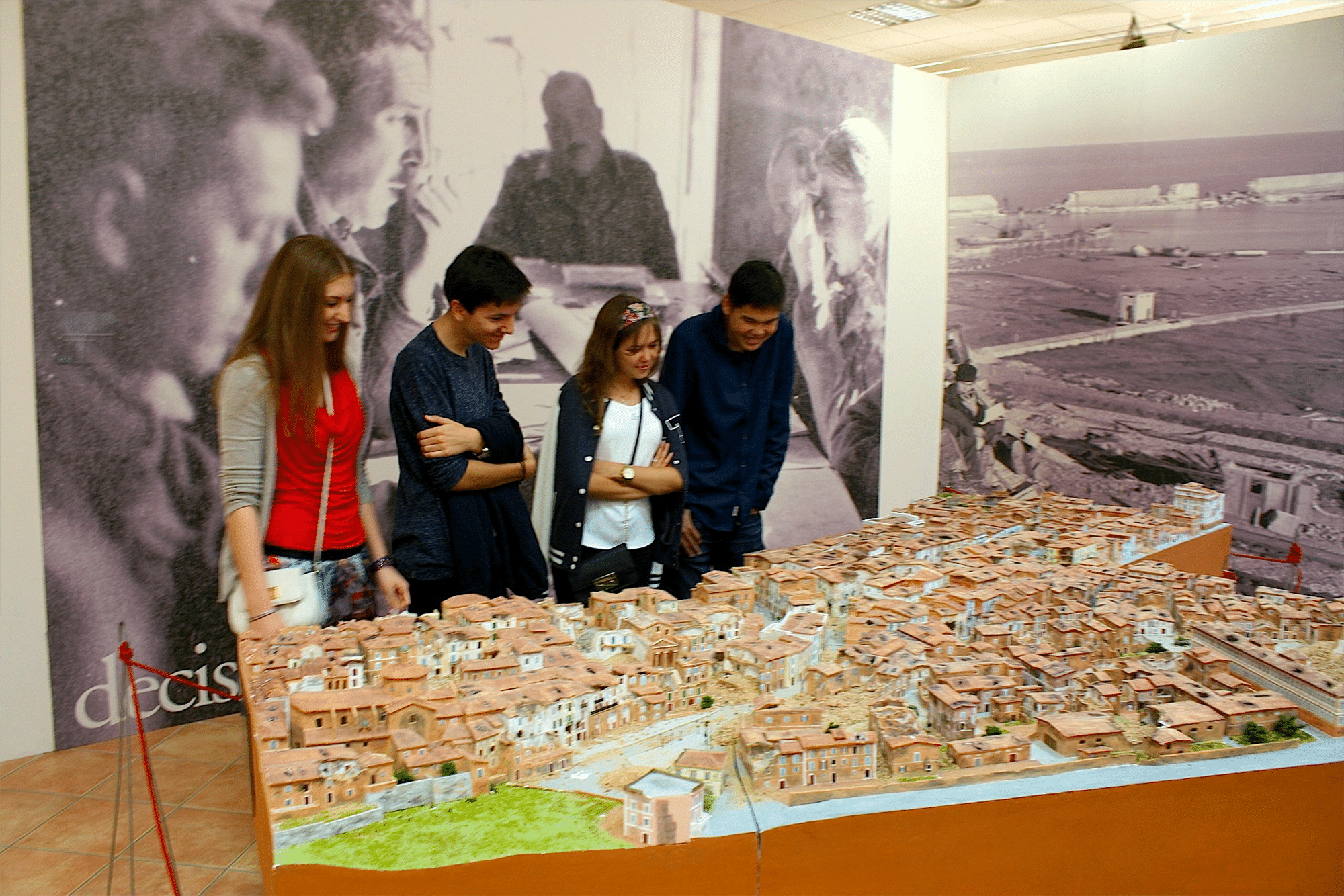 Battle of Ortona Museum shows photos of the battle, arms, uniforms and different arm artifacts. The Battle of Ortona was a battle fought between a battalion of German Fallschirmjäger, paratroops from the German 1st Parachute Division, and assaulting Canadian troops from the Canadian 1st Infantry Division. It was the culmination of the fighting on the Adriatic front in Italy. The battle, known to those who fought it as the “Italian Stalingrad” for the deadliness of its close-quarters combat. 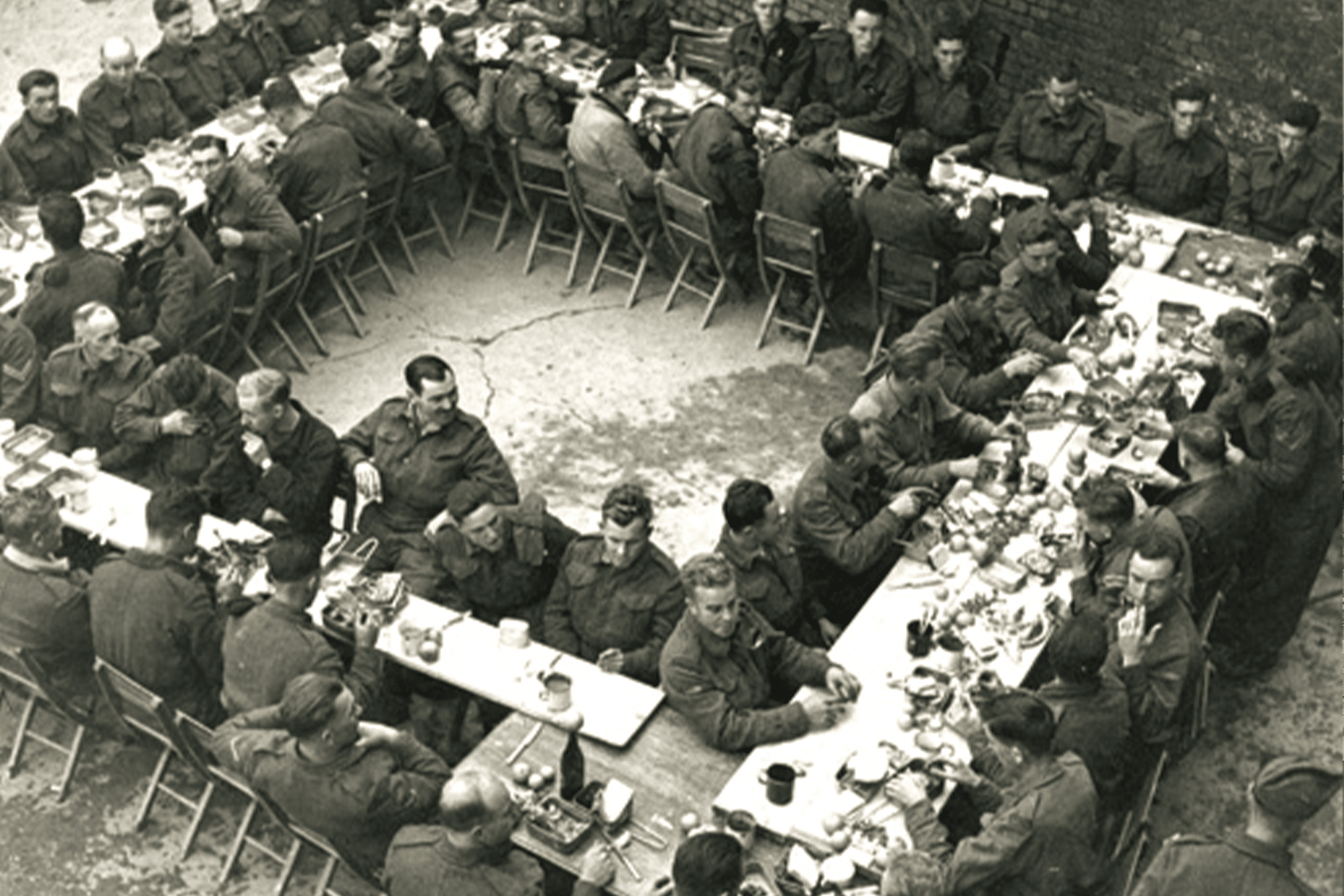 Ortona is a coastal town and municipality of the Province of Chieti in the Italian region of Abruzzo, with some 23,000 inhabitants. In 1943 Ortona was the site of a bloody battle, known as “Western Stalingrad”. A patron saint of Ortona is Saint Thomas the Apostle (Tommaso), whose relics were brought to Ortona in the 13th century by a sailor and are kept in the Cathedral of Saint Thomas. 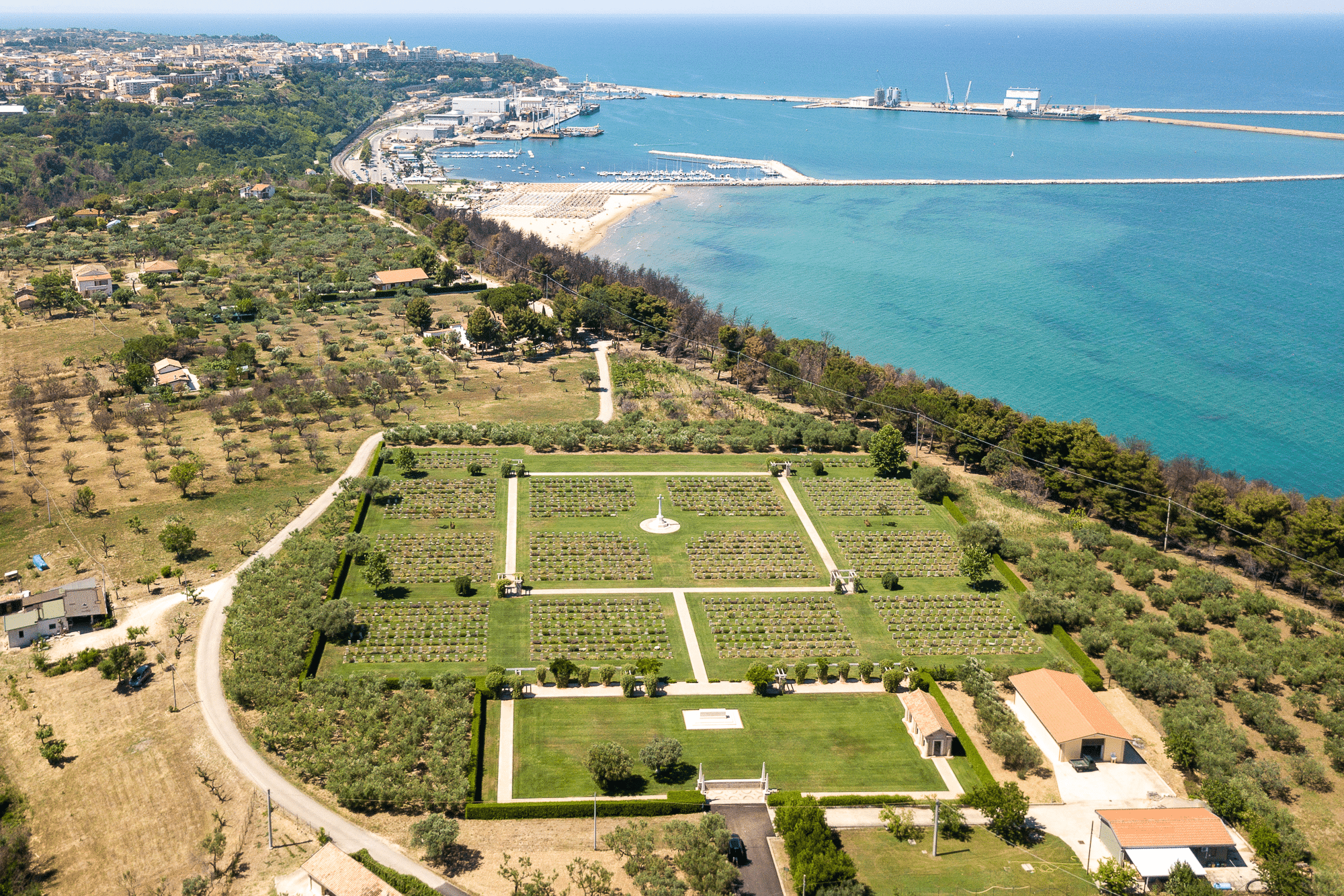 The Moro River Canadian War Cemetery lies in the locality of San Donato in the Commune of Ortona, Province of Chieti, and is sited on high ground near the sea just east of the main Adriatic coast road (SS16). The cemetery can be reached from Rome on the autostrada A25 (Rome-Pescara) by branching on the autostrada A14 and leaving it at Ortona. The approach road to the cemetery from the main road passes under an arch forming part of the little church of San Donato. 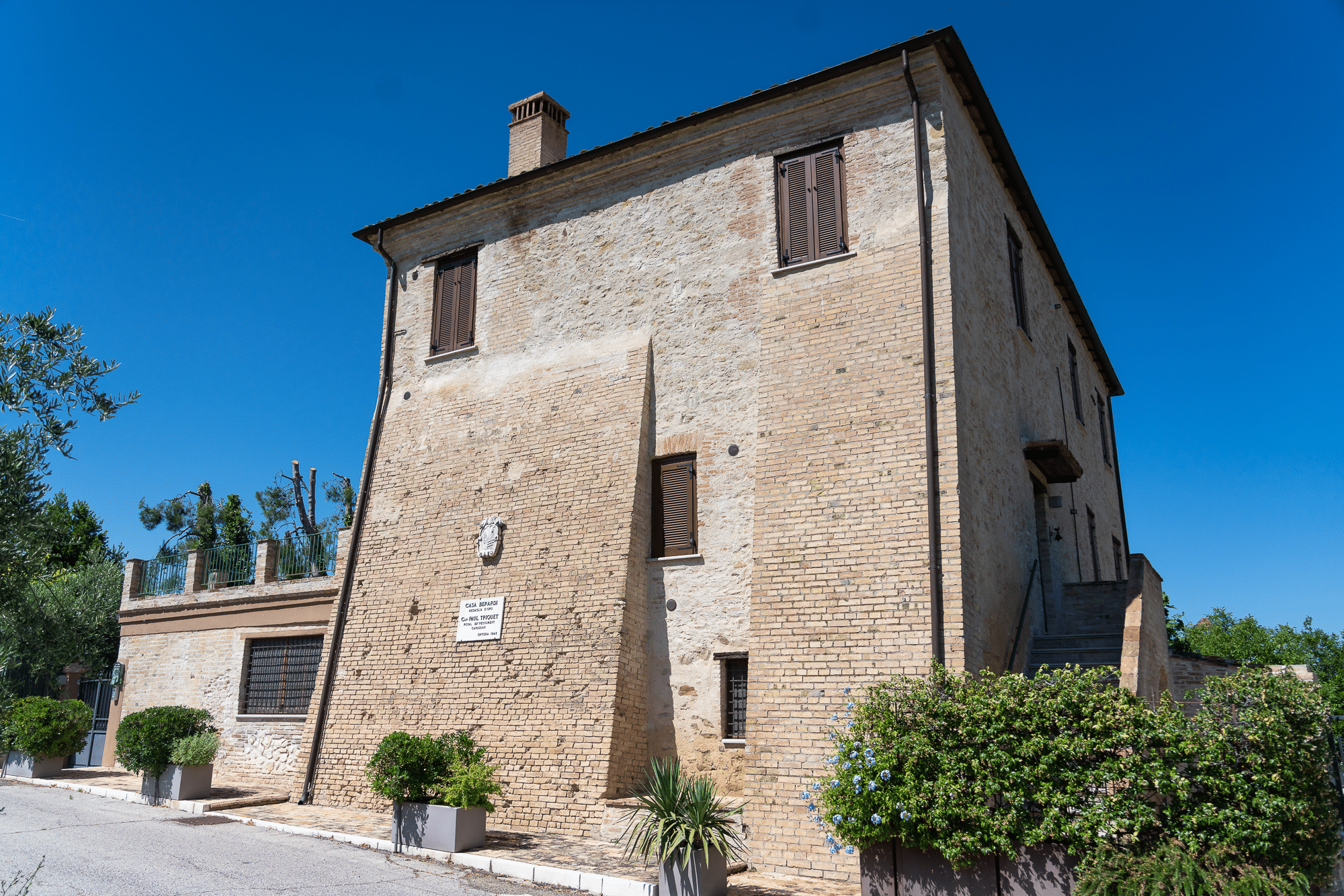 The Casa Barardi was a huge stonewalled farmhouse on the western approaches to the coastal town of Ortona. In December 1943 the Eighth Army had crossed the Sangro River and were advancing on Ortona with the 1st Canadian Division leading the way. The Canadians had one assault following the coastal road and another swinging in cross country from the west. 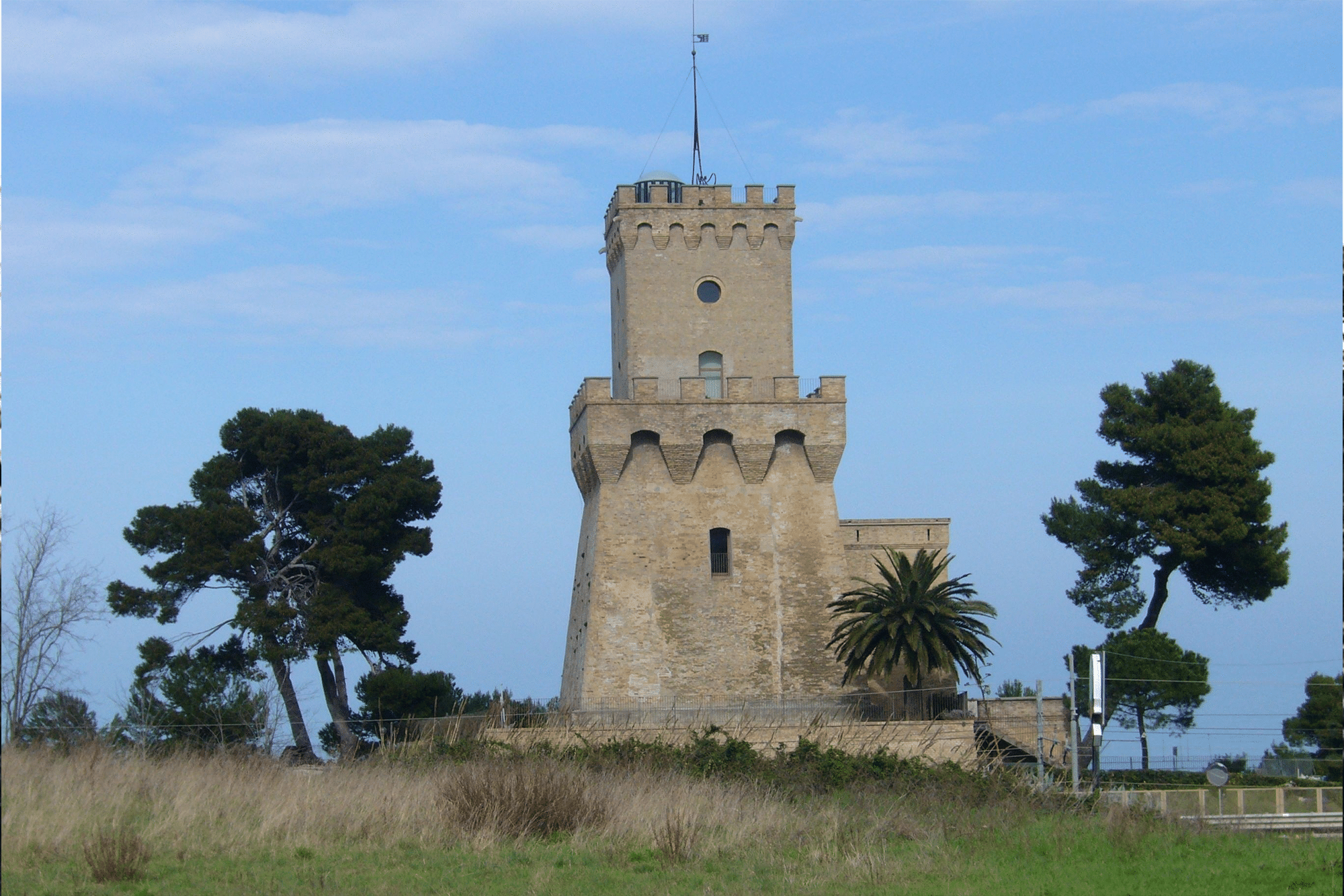 Pineto is a small, soft sandy seaside town set on Teramo’s coastline.  Part of Abruzzo’s ‘Sette Sorelle’ (7 Sisters), with its acclaimed Blue Flag status, and all the usual sun loungers, fish restaurants and amusements, Pineto has all that one expects from any seaside town on Italy’s Adriatic Coast. A tree-lined route from the old hillside village of Mutigano leads you to Pineto’s  forest besides the beach, ensuring whatever the season a decidedly fresh & fragrant salty walk in the shade can be had. 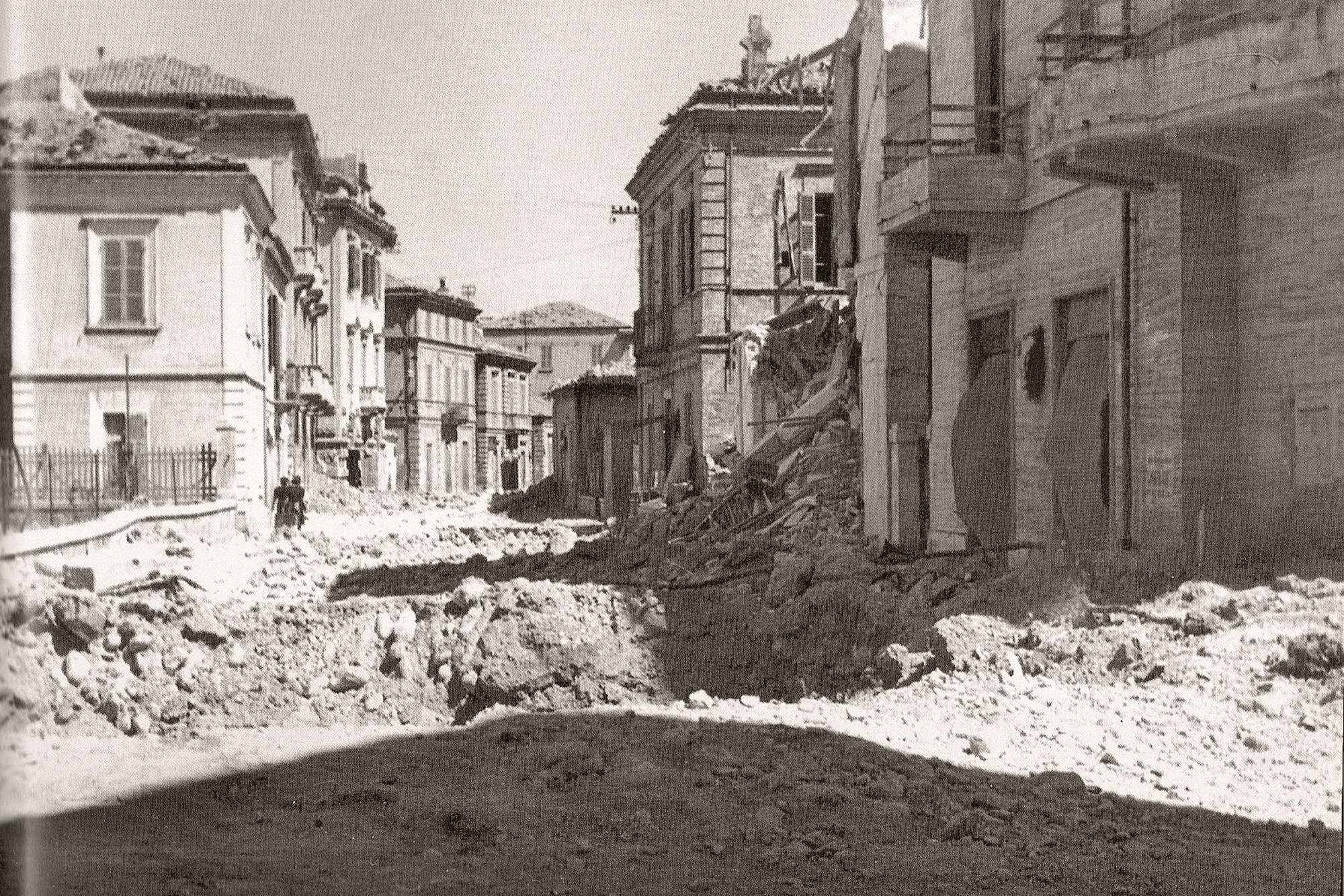 HISTORY – The Bombing of Pescara

The bombing of Pescara was a series of attacks by the United States Army Air Force on the city of Pescara in Abruzzo, Italy during World War II. The raids caused thousands of civilian casualties and left 80 % of the city destroyed or damaged. Pescara was a major objective in the Battle of Ortona. 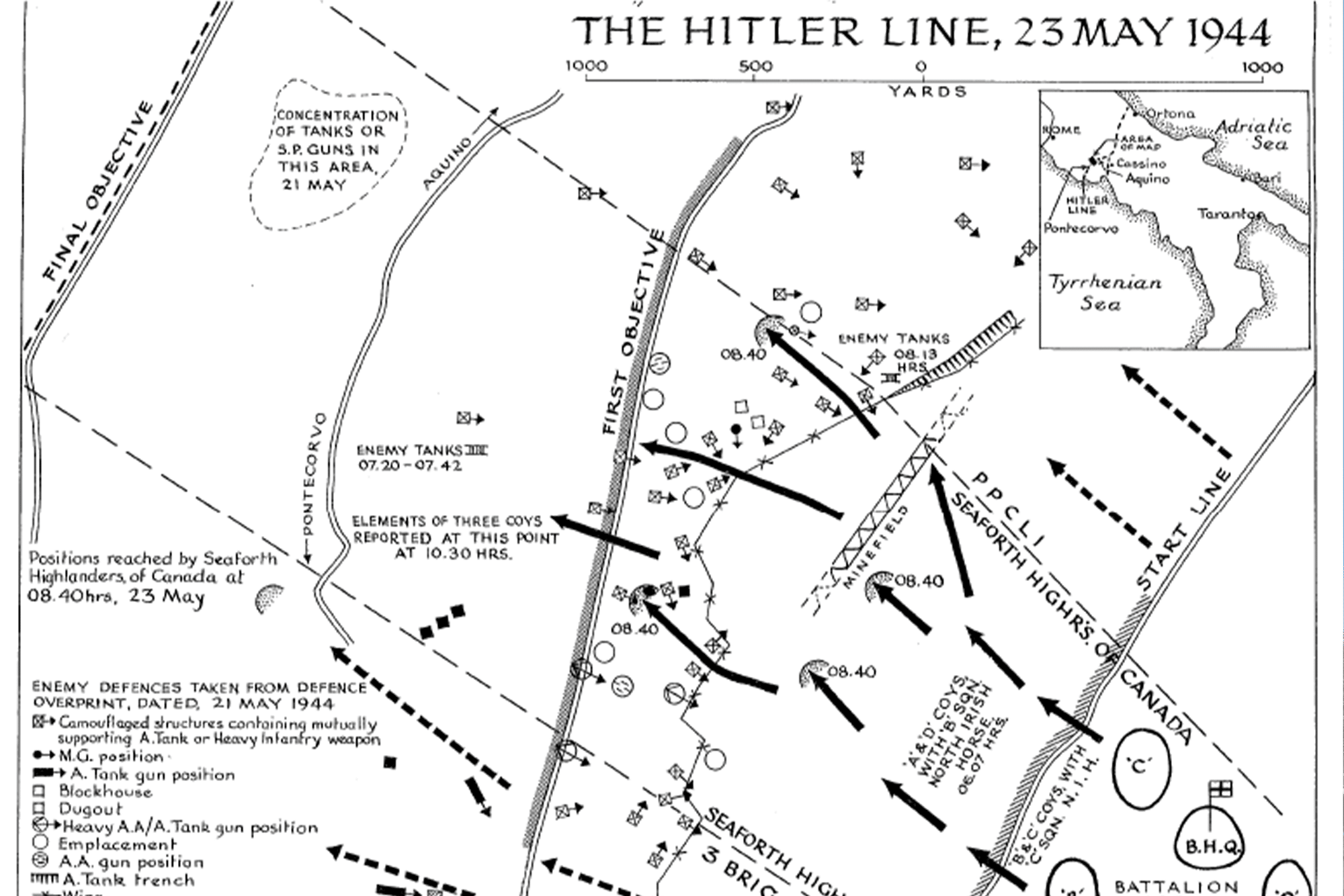 On the 20th of May 1944 The Seaforth Highlanders of Canada, as part of 2nd Brigade 1st Canadian Infantry Division, reached the outer fringes of the Hitler Line where in less than a week they would participate in one of the most intense battles of the Italian Campaign to date. With 210 casualties among the Seaforths it would be the most the battalion had ever suffered in one day throughout the war. 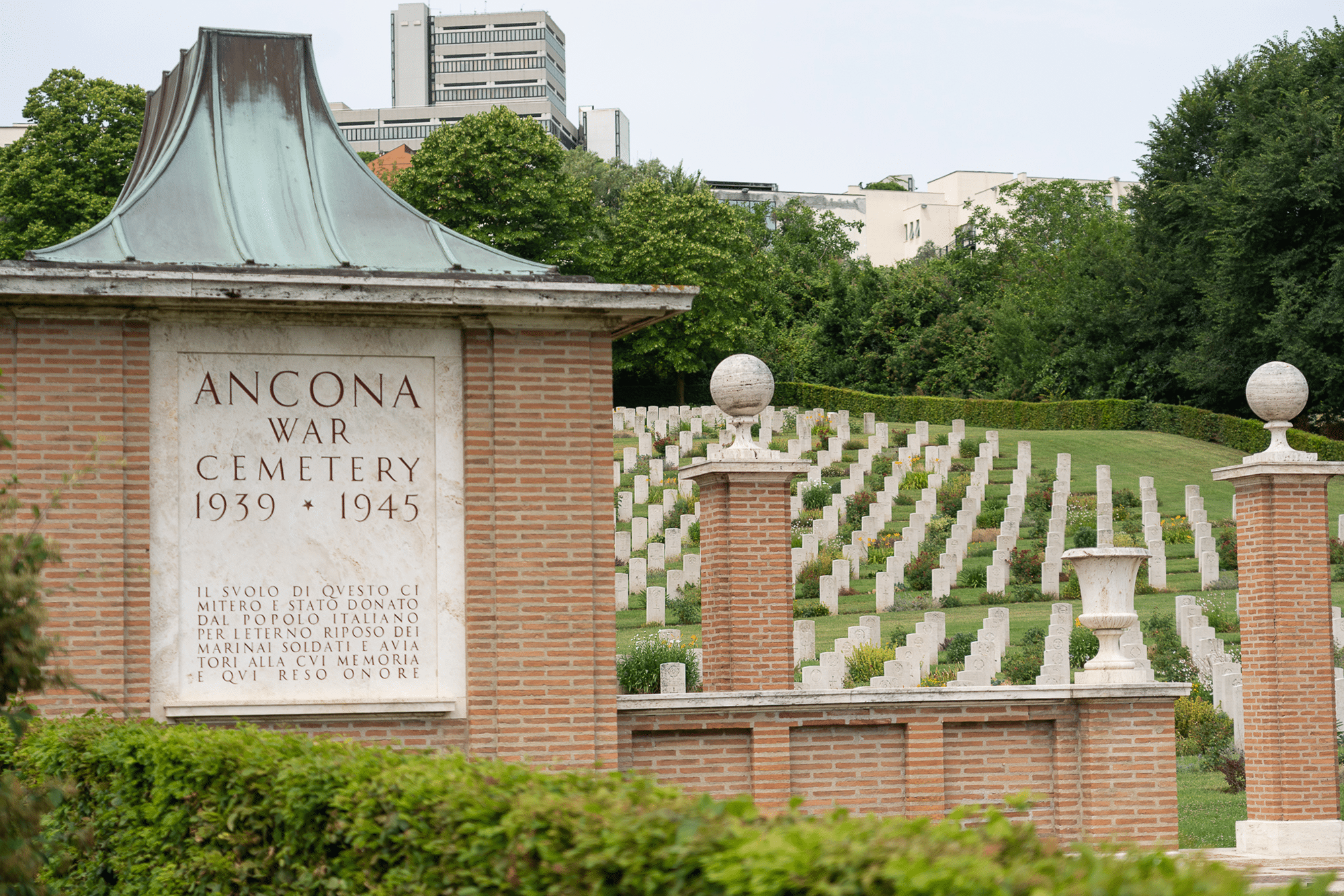 The cemetery at Ancona reflects the Allied progress up the Adriatic coast in August and September 1944. The cemetery site was chosen in September and graves were brought in from a wide area round about, extending from Pescara, 80 kilometres farther south, to Pesaro, over 48 kilometres north of Ancona. They include those of casualties from the first attacks on the eastern sector of the German defensive Gothic Line, near Fano and Pesaro, at the end of August and early in September, plus some 80 casualties from the L’Aquila bombing incident that occurred in December 1943. Ancona itself had been taken by the Poles on 18 July 1944 and, being little touched by the war, served as the main port for supplies for the attack on the Gothic Line and for the final break through the following spring at Argenta. 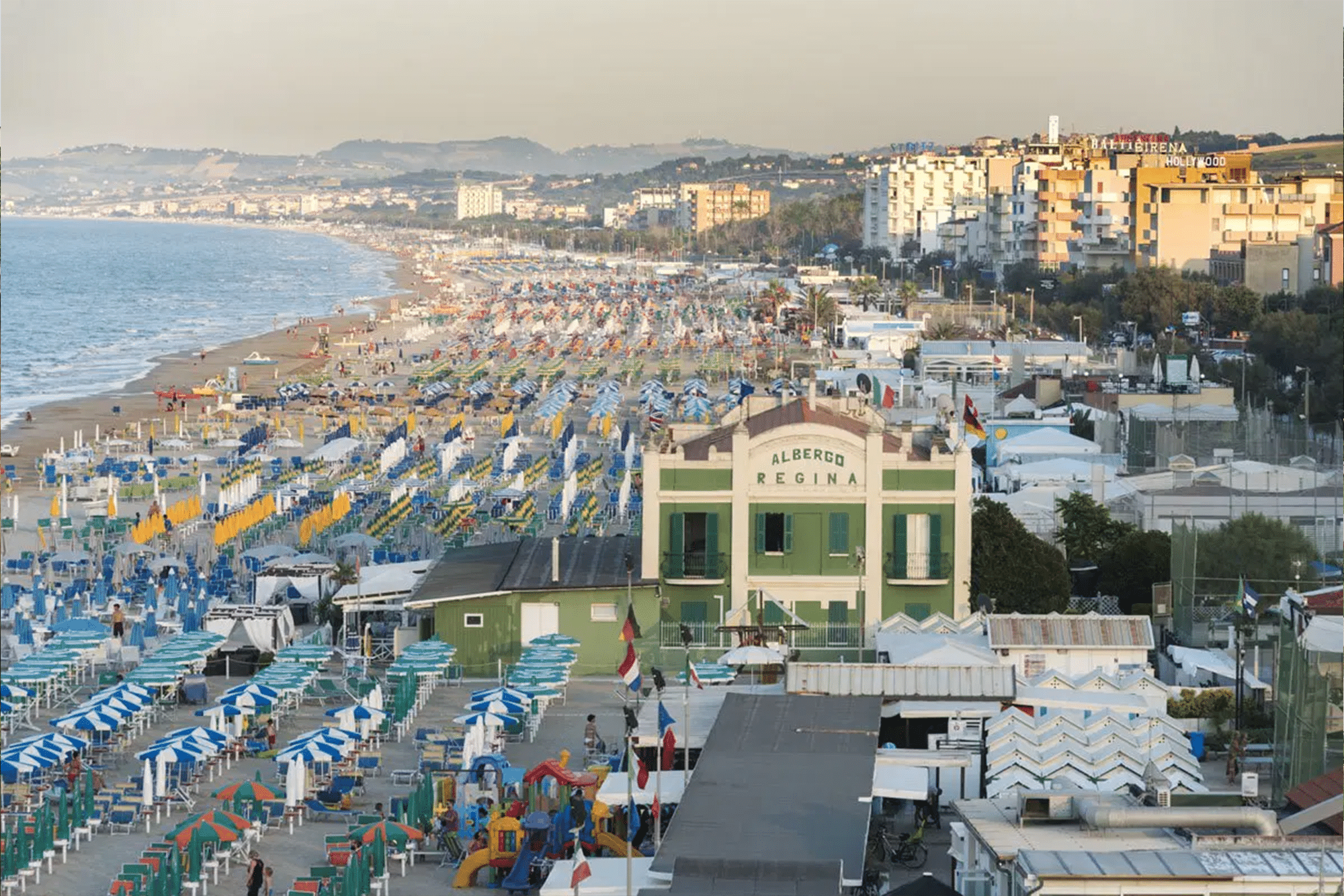 Though traces of the city’s history are still visible, much of today’s city is modern. Visitor attractions include Palazzo Comunale, Rocca Roveresca, (a castle of Gothic origins, restored by Baccio Pontelli in 1492). The Cathedral, erected after 1787 and Santa Maria delle Grazie, is one of the only two churches attributed to Baccio Pontelli. It once housed the painting of Madonna di Senigallia by Piero della Francesca. 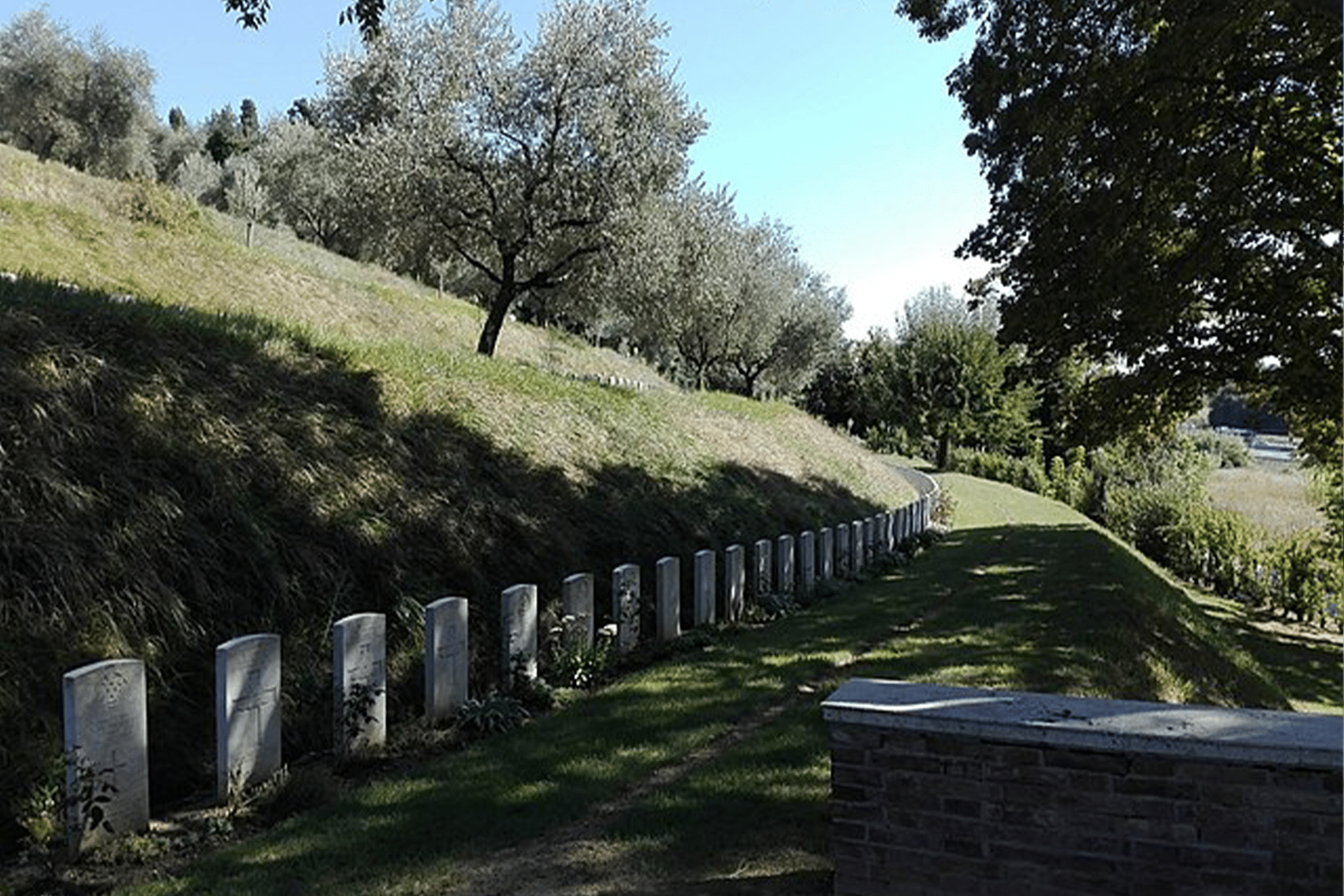 Following the fall of Rome to the Allies in June 1944, the German retreat became ordered and successive stands were made on a series of defensive positions known as the Trasimene, Arezzo, Arno and Gothic Lines. The site for the cemetery was chosen in November 1944 and it contains the graves of casualties incurred during the advance from Ancona to Rimini, which broke the German’s heavily defended Gothic Line, and in the heavy fighting around Rimini, which was taken by the Allies on 21 September 1944. Gradara War Cemetery contains 1,191 Commonwealth burials of the Second World War. There is also one Belgian war grave. 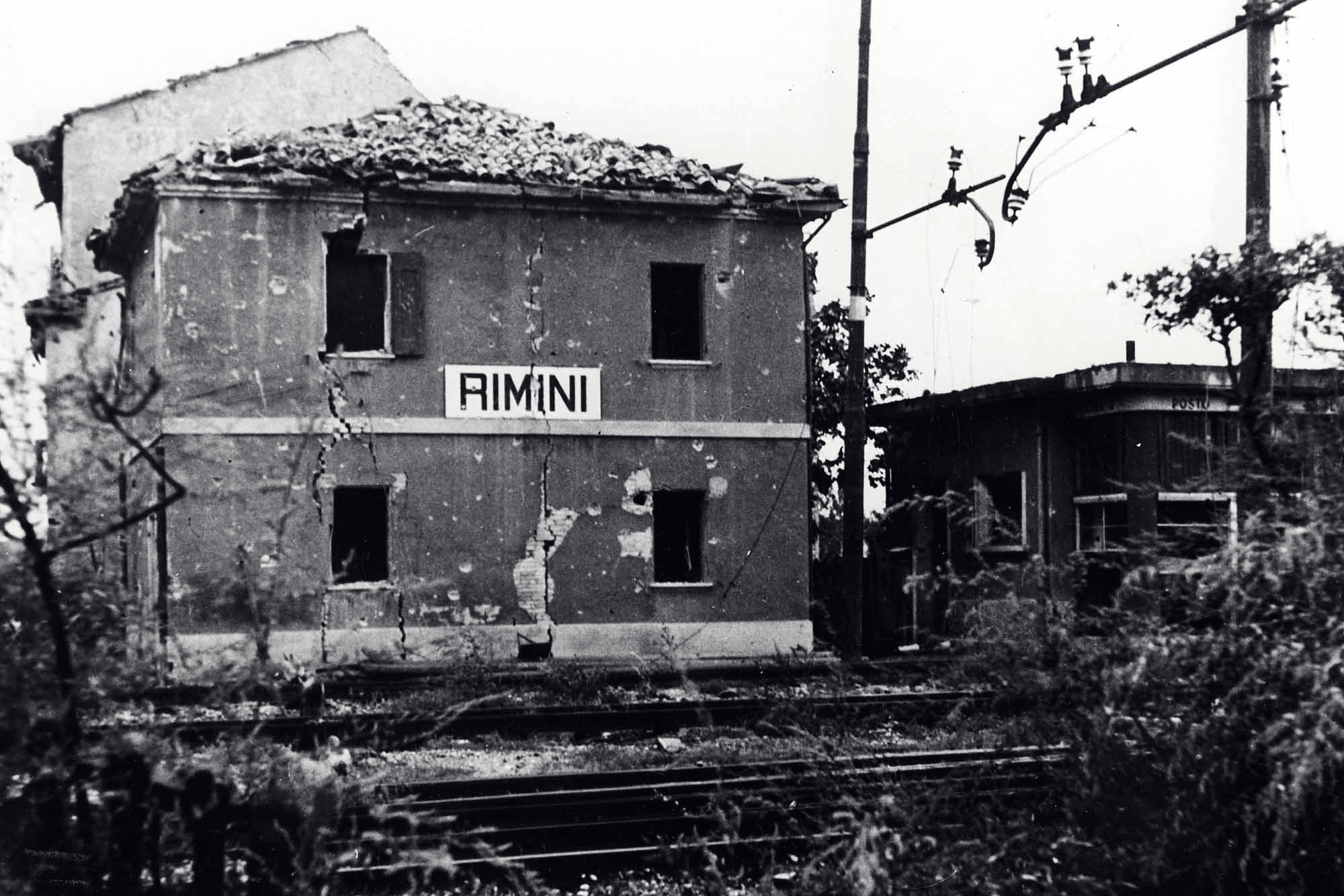 In the Second World War, Canadians began fighting in Italy in July 1943. By the summer of 1944, the Allies had pushed German forces to one of their last defensive positions — a stretch of heavily fortified territory in northern Italy known as the Gothic Line. The main job of breaking the Line fell to the I Canadian Corps, which accomplished the task after a month of difficult combat, at a cost of more than 4,500 casualties. Although overshadowed by the Allied invasion of France, cracking the Gothic Line was among Canada’s greatest feats of arms of the war. 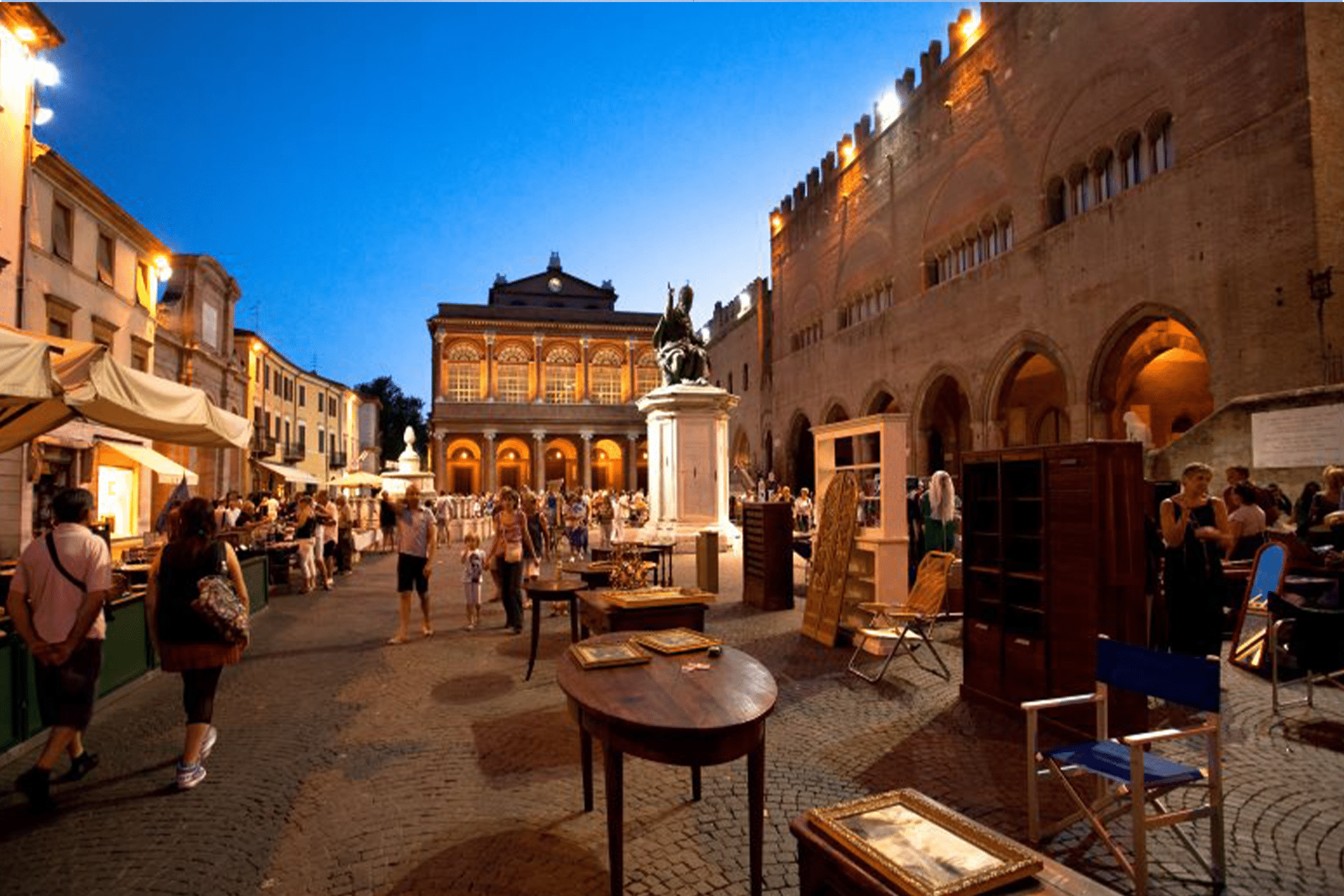 Riccione is sun-soaked and stylish, an ancient Italian settlement with modern, global flair. Located in the heart of the Eastern Riviera, this coastal destination is the perfect place to sip a cocktail while lounging on golden sands. At night, party people spill from the open-air discos onto the beach, creating a surreal sort of everlasting outdoor party. Zip down a slide at a water park, spin it up on a guided cycling tour, or visit the nearby Misano World Circuit racetrack for an unforgettable getaway. 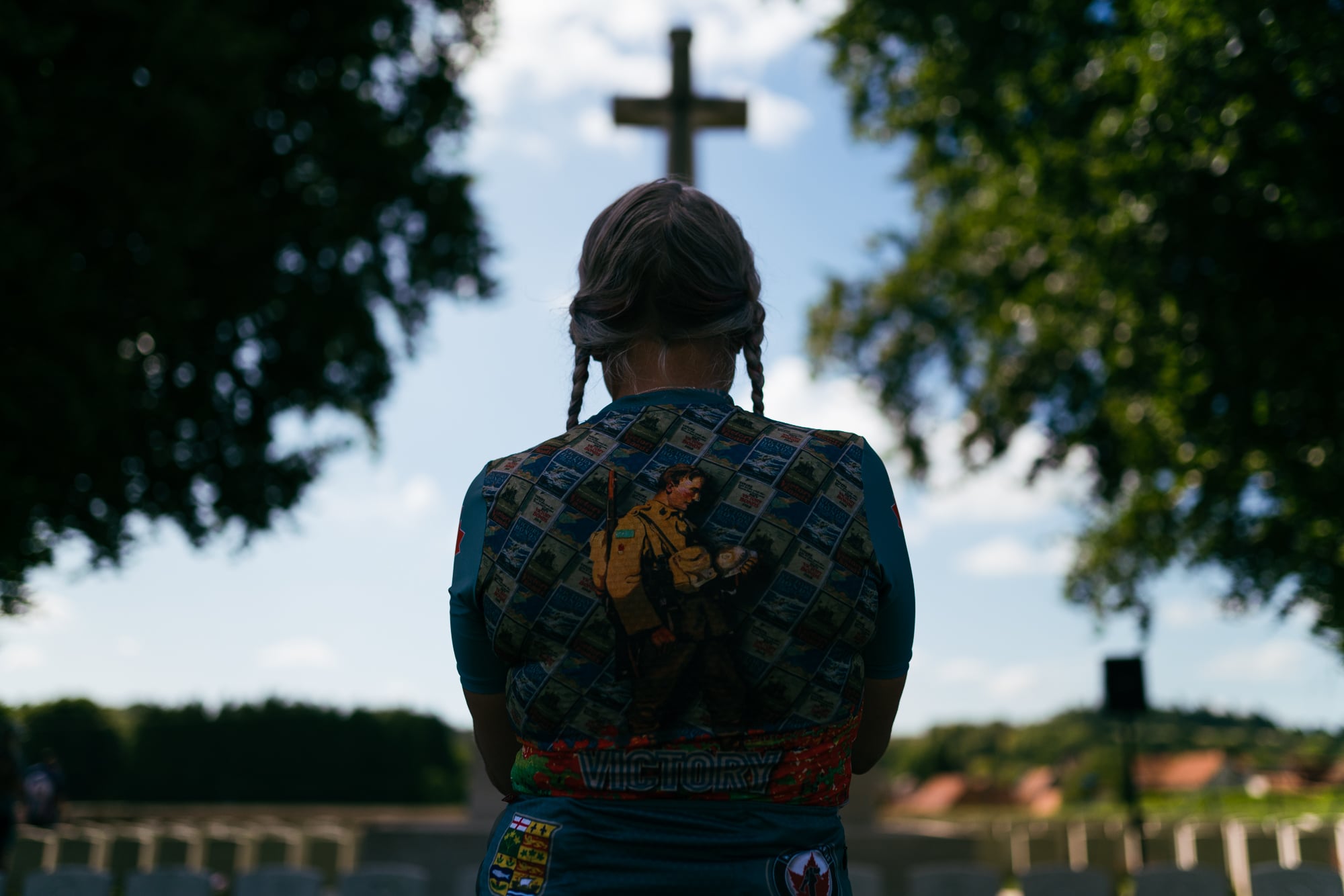 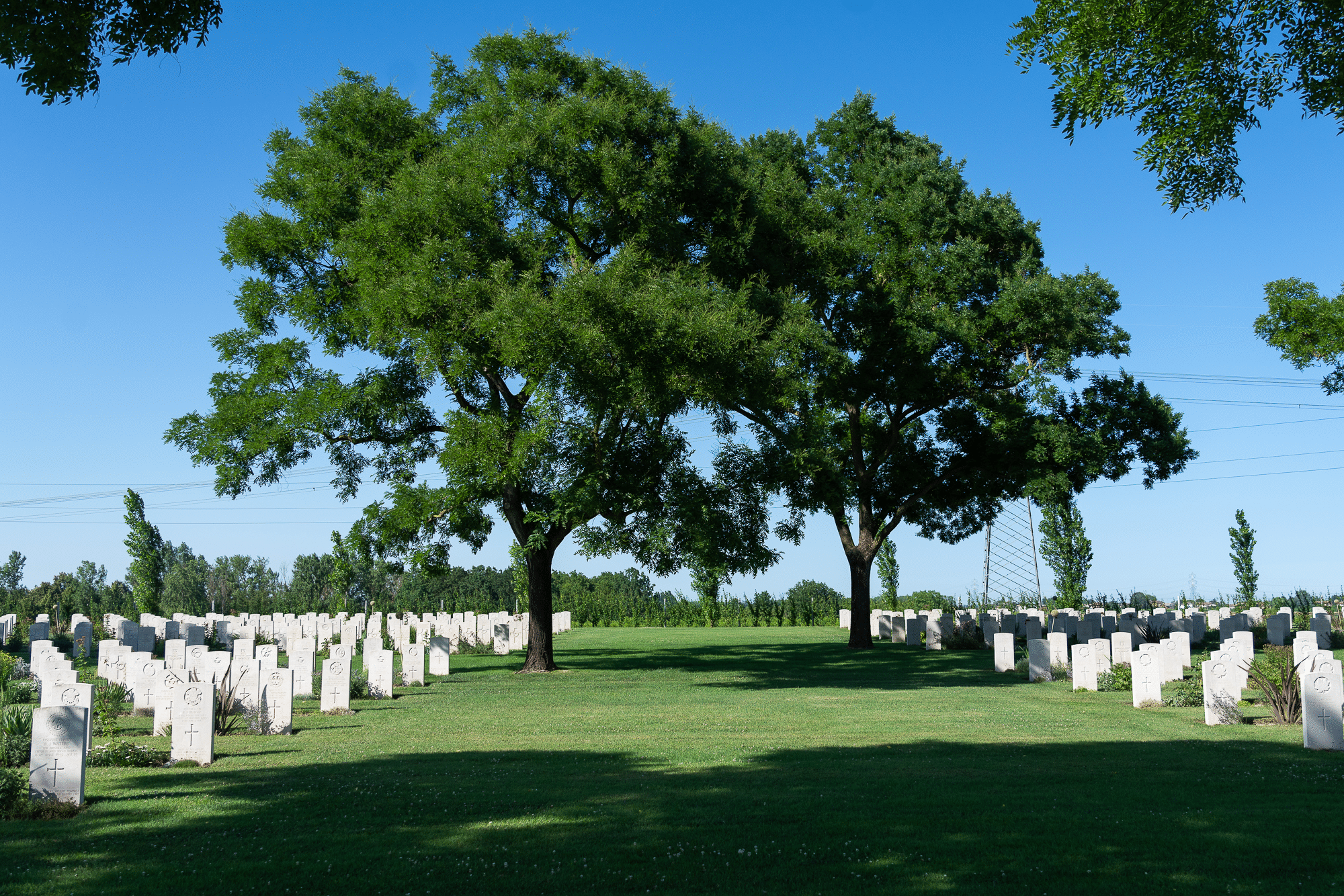 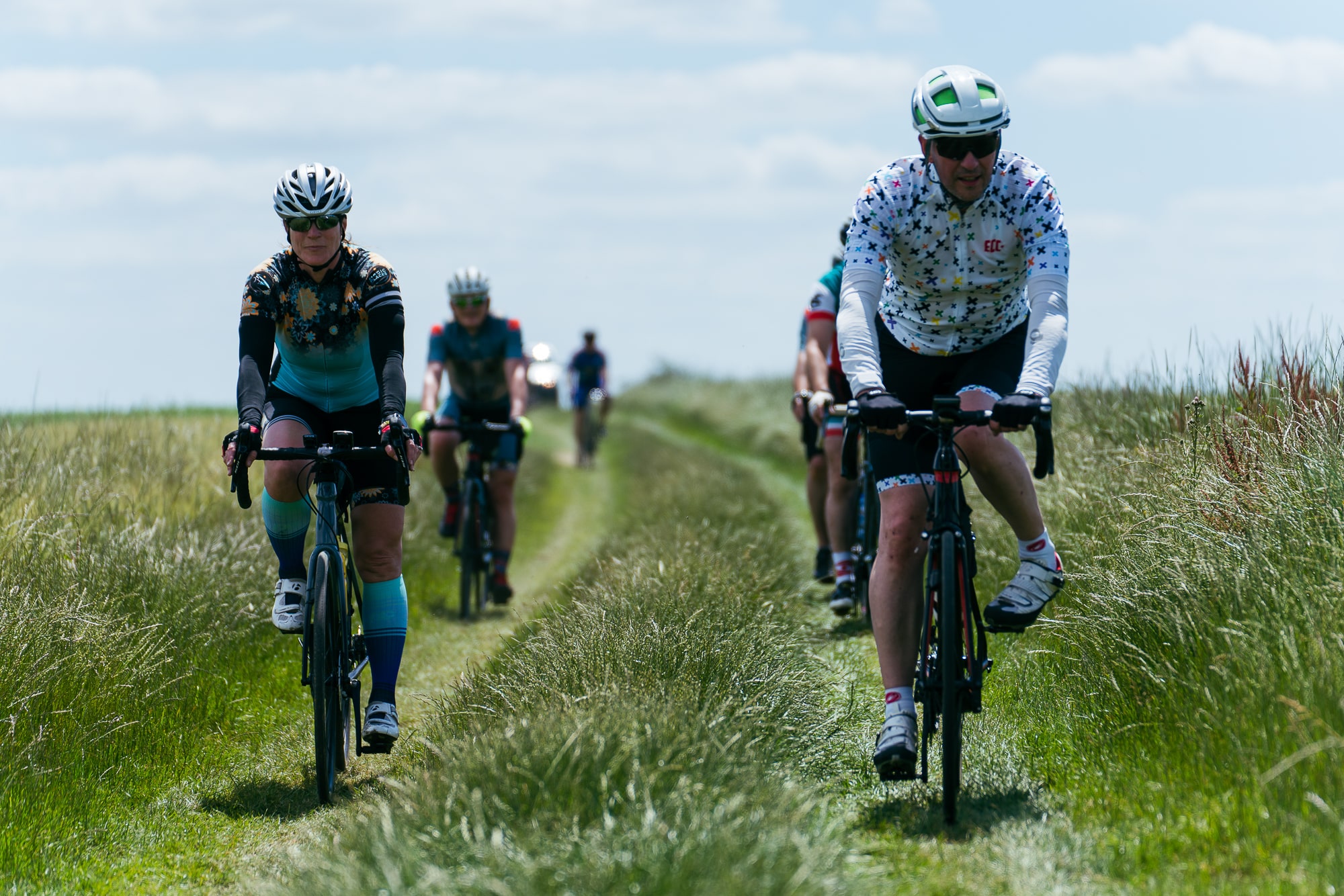 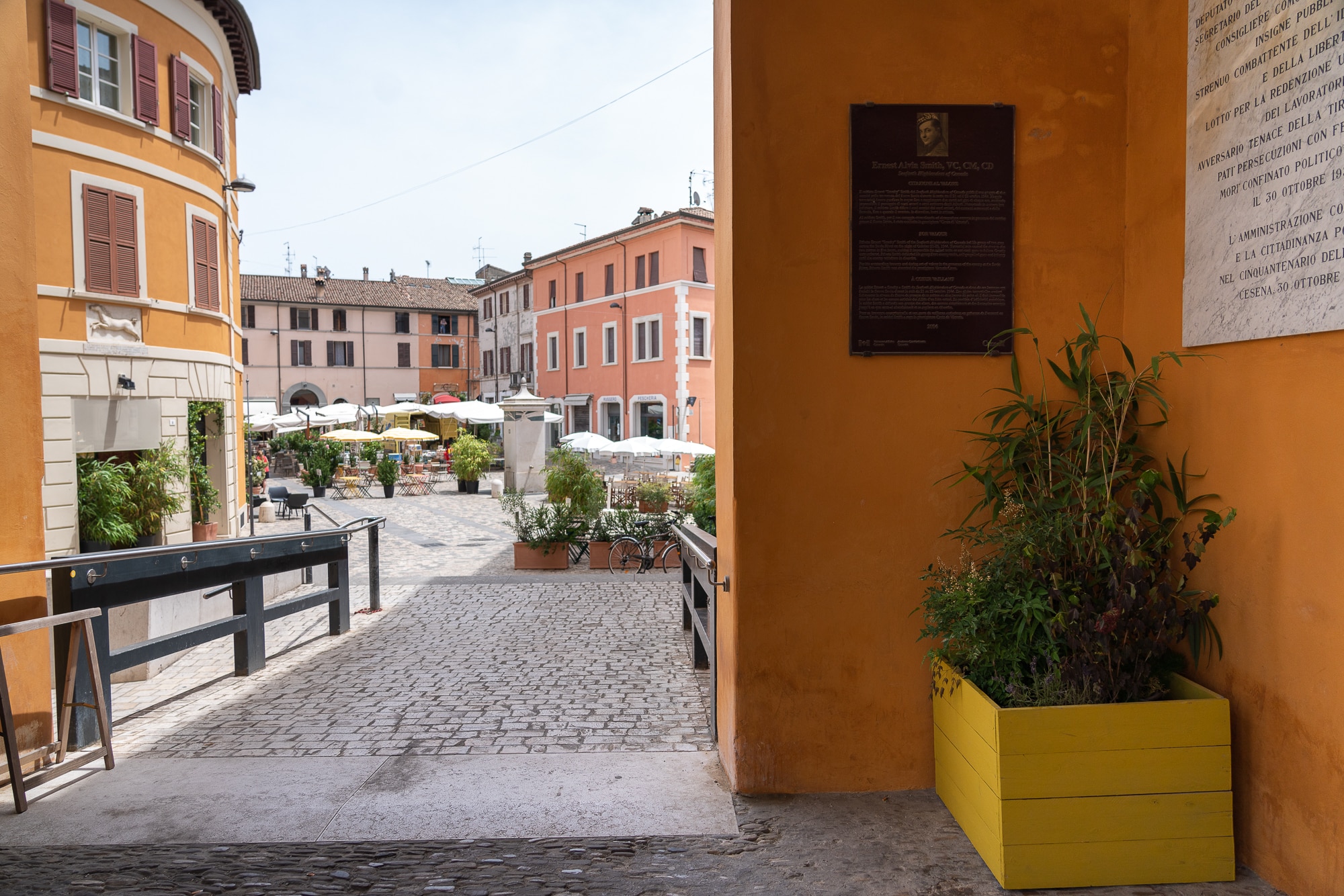 Ernest “Smokey” Smith was born on 3 May 1914 in New Westminster, British Columbia. He enlisted with the Seaforth Highlanders of Canada in March 1940 and began basic training with the Royal Canadian Regiment in Toronto. He went on to complete his training at Camp Borden before sailing out of Halifax to join the war effort in Europe. During the Second World War, Ernest “Smokey” Smith became the only Canadian private to earn the Victoria Cross after he almost single handedly fought off German tanks and soldiers during the Italian Campaign.

Ravenna was taken by the Canadian Corps at the beginning of December 1944, and the burials in the cemetery there reflect the fighting for the Senio line and the period of relative quiet during the first three months of 1945. Many of the men buried there were Canadians; one of the last tasks of the Canadian Corps before being moved to north-west Europe was the clearing of the area between Ravenna and the Comacchio lagoon. 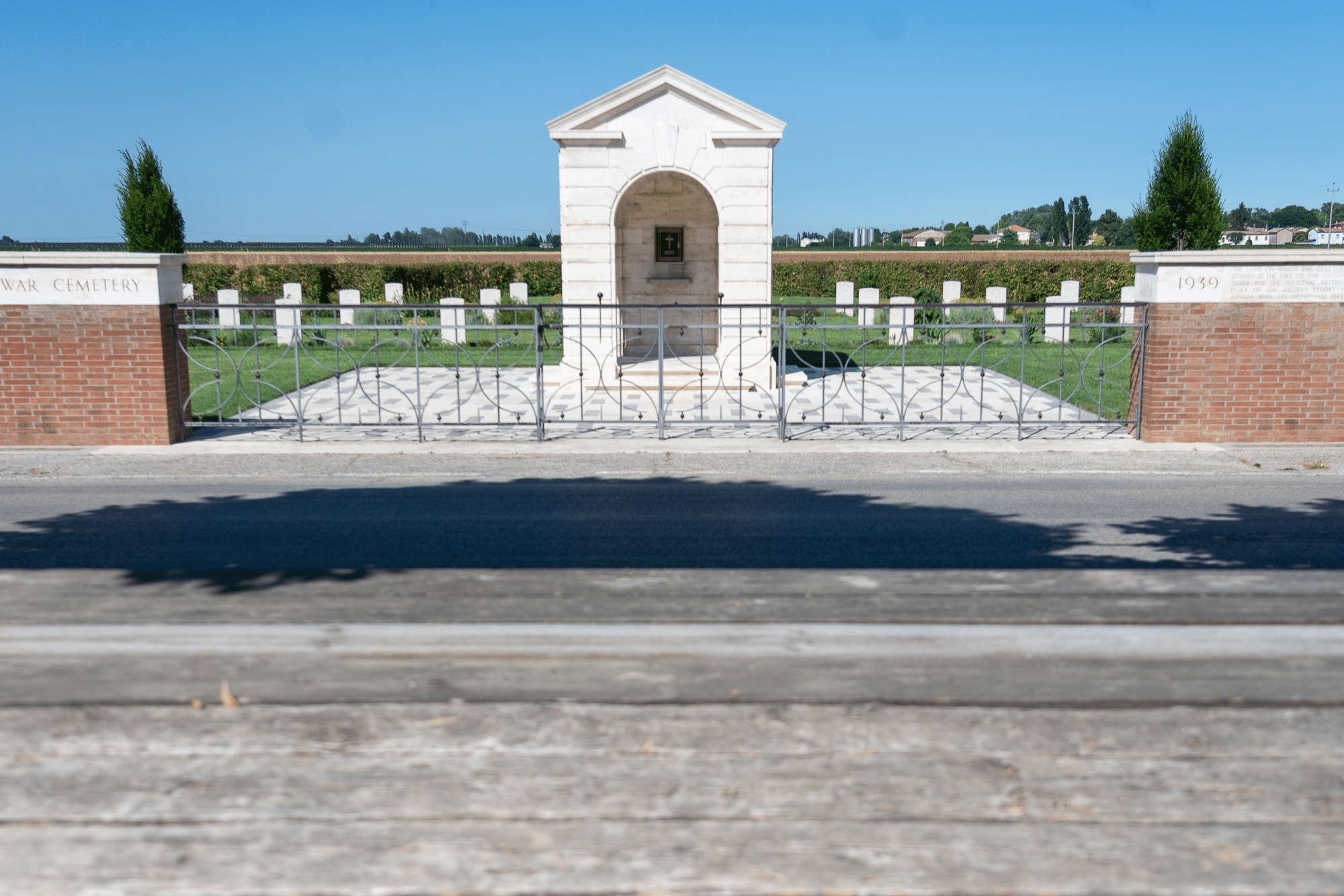 The site of this cemetery was chosen by the 5th Canadian Armoured Division for battlefield burials. It was in the vicinity of Villanova that troops of this Division succeeded in establishing a bridgehead over the River Lamone in the night 10/11 December 1944. West of this bridgehead there was heavy fighting in the following days, when attempts were made to cross the three canals that run from Faenza to the sea.